THE SOCIETY OF DIVINE VOCATION
The Vocationist
The Vocationist Fathers and Brothers are a Catholic Religious Congregation that strives to foster vocations to the Priesthood and Religious Life, especially among the poor.
Its main ministry is to identify and guide those who believe they are called to serve God as Priests or Brothers.

Our ministry is carried out in Parishes, Schools, Missions and our main field of apostolate, The Vocationary, a place for vocational discernment and religious formation.

The Vocationist Fathers and Brothers live in community and take the vows of poverty, chastity and obedience. 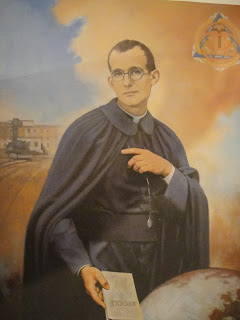 Father Justin Russolillo was born on January 18, 1891 and baptized in Pianura(Naples) on the next day, . After completing Grammar School in his home town, he entered the Seminary of Pozzuoli, where he distinguished himself for intelligence, humility and piety. Bishop Zezza and Marquis Zampaglione were glad to pay the Seminary tuition for such a brilliant and pious seminarian.

On September 20, 1913, Justin was ordained a Priest. While kneeling before the Bishop for the ordination, he vowed to the Lord to found a religious Congregation to cultivate vocations to faith, priesthood and holiness.

As a priest, he intensified the work that he had already begun as a Seminary student. When he was appointed Pastor of Pianura on September 20, 1920, he soon started working for the realization of his mission.

On October 18 of the same year, the first community of Vocationist Fathers came into being at the Rectory of St. George's Parish. One year later the Vocationist Sisters Community was formed with the same aims and goals of the Fathers.

Wherever they went, their main goal was the search and cultivation of vocations, especially among the poor and the underprivileged. The Blessed Trinity, the Holy Family and the Mother Church were the source and center of his spirituality and of his multiple ministries.

The two religious congregations of the Vocationist Fathers and Sisters became congregation of Pontifical Right respectively on January 3, 1948 and on May 24, 1947.
Fr. Justin completed his earthly mission on August 2, 1955, comforted by the Sacraments of the Church. Said petition was readily granted on April 3, 1978, and on December 18, 1997 Pope John Paul the Second officially declared that Fr. Justin had practiced the Christian Virtues in a heroic manner and therefore he was being raised to the dignity of VENERABLE, and now on May 7th, 2011 Fr. Justin was raised again to the honor of BLESSED by His Holiness Benedict XVI.

ULTIMATE GOAL
The ultimate goal of the Society of Divine Vocations is to direct and lead all members, and through them all people, to a perfect union with the Divine Persons, through communion with the Sacred Heart of Jesus.

For the achievement of this divine union, it works for Universal Sanctification promoting ascetical and mystical life and the propagation of religious life in every walk of life.

For the achievement of Universal Sanctification, it considers the whole world as "a great sanctuary" and directly works for the furtherance of all parochial, Diocesan and pontifical ascetical activities.

MISSION IN THE CHURCH

Within the Church, the Society of Divine Vocations embraces as its own particular mission, the searching out and formation of priestly and religious vocations, especially among the underprivileged, through its characteristic work, the VOCATIONARY.

Through this charism received from the Lord, it serves the Church in Dioceses, fostering local vocations both for the Diocesan clergy and religious life.

The Holy Church, the Holy Family, and the Divine Trinity are the center and axis of the Society of Divine Vocations. The Vocationist works in the Church, with the Church, for the Church. He imitates the Holy Family in the relationships of soul-child, soul-spouse, and soul-mother of God.

The spirit of the Vocationist toward the Lord is that of a living image and likeness of Him and of a personal relationship of love with Him with docility to the divine inspirations controlled and approved by the Church.

Toward the neighbor, in every ministry, the spirit of the Vocationist is that of the humble, faithful and loving servant, who becomes everything to all men, according to the characteristics of the good servant found in the revelation of the Old and New Testaments, in order to unite all to the Lord as true religious of God.

Toward himself, the spirit of the Vocationist is that of the daily conversion to the Gospel, in the silence of all his being, and in the multi-faceted oblation of himself to the Lord, in order to be all absorbed in His glory, love, and will.

Holy Family: This is the Union of Jesus, Mary and Joseph. Each Person in the holy family represents through the symbols in emblem. Jesus is displayed through the Cross, Sacred Heart and Eucharist. Cross is the symbol of our salvation. Sacred Heart is the symbol of Divine Mercy and the Eucharist is the visible image of invisible God. Shining Star symbolizes the Blessed Mother. St. Joseph is represented by Lily. Vocationist still greets each other with salutation – “Jesus, Mary and Joseph”. According to Fr. Justin, Vocationist Fathers are like St. Joseph and Vocationist Sisters are like Blessed Mother to foster the Divine Vocations in the seminarians.

Arch Angels: - The Emblem is surrounded by Seven Arch Angels. Only three of them we know from the Scripture. They are St. Gabriel, St. Raphael and St. Michael.

Fields: Vocationist Fathers and Sisters work through the three fields to promote Vocations which are 1) Parishes, 2) Schools and 3) Missions. This is the main mission and goal of this congregation. Each Vocationist is obliged to work with vocation and for vocation in whatever fields they are especially for underprivileged vocations.

To those who find the Vocationist Emblem too detailed and complicated, Fr. Justin more than once said in his instructions: "The essence of our Emblem consists in three circles intertwined with a triangle;" therefore, Fr. Justin indicates that a simplified version of our Emblem is acceptable.

"This Emblem is meant to be a ray for every intelligence, an arrow for every heart and a place for every soul that wants to start its journey toward Divine Union." Thus he wrote one day presenting the Vocationist emblem to the readers of "Spiritus Domini."


VOCATIONIST MISSION IN THE UNITED KINGDOM 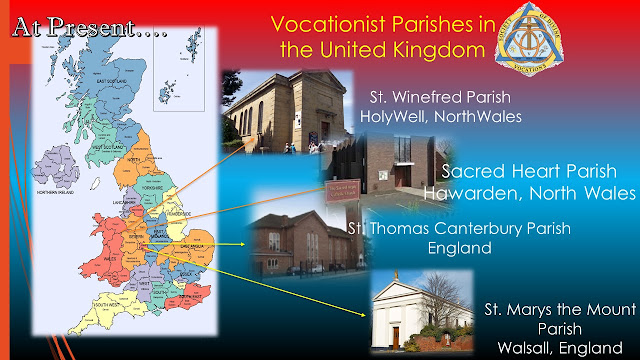 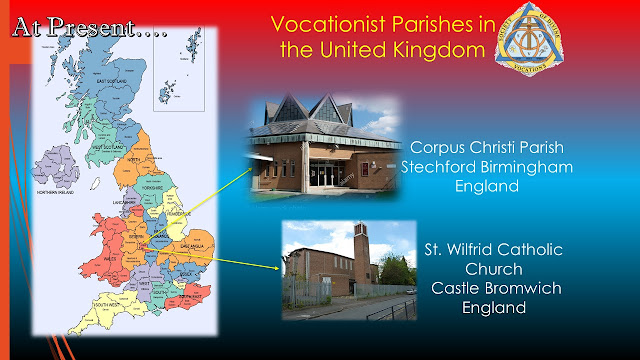